I won’t lie—I adore that animated Anastasia movie from the 90s. It’s got wonderful music, a lovely story, the animal sidekick is a Russian bat…what more could you want?

Here’s the downside to a movie like that though—people think that movie represents what really happened. I mean, sure, they know that the magic bits were probably fake, but they assume Anastasia really did escape, that Rasputin really was the bad guy, and that the talking Russian bat was…well. I don’t know what they think about the talking Russian bat. Either way, they take the animated movie as truth rather than a fictionalization of history.

Of course, TSARINA is also a fictionalization of history too, so don’t think I’m judging—but I am pretty proud of the fact that, magic aside, the book is rather historically accurate, even down to the street names. I admit, though, that there aren’t any Russian bats in my book. For this, I am sorry.

Let’s break down the movie piece by piece, shall we?


In the movie:
Anastasia and her family are run out of the Winter Palace during the February revolution. Anastasia is about 8 years old, give or take. They flee for their lives! They run to the train station! Anastasia is accidentally lost in the chaos!

In reality:
Anastasia and her family were long, long out of the Winter Palace by the time the February revolution happened. Because the political climate in St. Petersburg had gotten so bad, they were living just outside of the city, in another residence called the Alexander Palace. Anastasia was actually about 16 at the time. The family was put under house arrest at the Alexander Palace, and eventually were moved across the country along with a handful of servants. 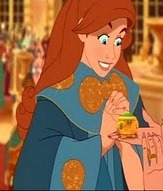 Movie Anastasia at the time of the Revolution

Real Anastasia at the time of the Revolution (She’s on the far right. Okay, I know it’s not the most flattering photo of her, but they’d been captured and were living in Siberia, so cut her a break?)

In the movie:
Anastasia returns to St. Petersburg when she’s about 18, with a dog and a head full of amnesia. The rest of the royal family has been executed, but the rumor in St. Petersburg (delightfully explained via a musical number) is that Anastasia survived the execution.

In reality:
I’m sad to say, Anastasia did not survive the execution of her family. Tsar Nicholas, his wife Alexandra, and their children Olga, Tatiana, Maria, Anastasia, and Alexei all died. They were executed in a basement in Ekaterinberg, after having been imprisoned by the Reds for about a year. It was a brutal execution, and one that, quite honestly, I have to work very hard not to dwell on. For a long time there was speculation that Anastasia (or Maria) and Alexei survived, because their bodies were not recovered with the others. However, many years later, their bones were found and DNA confirmed that all of the Romanovs are accounted for.


In the movie:
A young man named Dmitri is holding auditions, looking for someone to play Anastasia so that he can collect the reward her grandmother— who survived the revolution by fleeing to Paris early— is offering.

In reality:
Basically, all of the “real” bits are in this section:
1) Anastasia’s grandmother, Maria Feodorova, did survive the revolution and desperately, desperately wanted to believe that her children and grandchildren did as well. She wasn’t living in Paris, though— she was in London.
2) There was, in fact, a man who defrauded noble families with impostors he tried to pass off as the grand duchesses. He wasn’t handsome, and he wasn’t named Dmitri— he was named Boris, and he was actually the husband of Maria Rasputin, who was Grigori Rasputin’s daughter.

In the movie:
Dmitri has those aforementioned auditions in the Winter Palace in St. Petersburg

The Alexander Ballroom in the movie.


In reality:
The movie actually did a pretty decent job with the Winter Palace– it’s pretty accurate, if you ask me! In the movie:
Rasputin sings the best villain song ever, after Poor Unfortunate Souls (which, obviously, is the number one villain song of all time). Rasputin has cursed the Romanov family because they betrayed him and threw him out of Russian court. His curse made each of them pay! But one little girl got away! Little Anya beware, Rasputin’s AWAKE!

In reality:
Rasputin sort of fueled the Russian revolution, but saying that he was directly responsible for the Romanov’s fate is a pretty huge stretch. Rasputin came into the Romanov’s lives because he was a “holy man” who the Tsarina believed could cure Alexei’s hemophilia. Was he holy? I don’t know. He was definitely a pretty strange guy, though. He was allowed access to the royal family that a lot of nobles were very uncomfortable with— especially since he was a drunk womanizer who didn’t bathe. Eventually, a group of nobles coaxed Rasputin out of his house, and murdered him, because his creep level had just gotten way too high. The royal family never betrayed him, and they continued to secretly love and miss him after he was gone.


In the movie:
Bartok

Here’s the thing though— if the Anastasia movie, no matter how inaccurate, makes people interested in Russian history? Makes them turn to Google and read up? Then it’s AWESOME. It’s sort of like a My First History lesson, which eases you into the whole thing by way of catchy songs and a charming love story. Plus, the songs, guys. HOW MUCH DO YOU LOVE THE SONGS?