This post was part of my TSARINA blog tour, and originally appeared over at YA Reads.

1) Peter the Great is your Dental Nightmare
They didn’t call this guy The Great for kicks. He was great at a lot of things! He modernized Russia, built schools, created the Russian navy, bolstered the army— you can’t deny the man got things done. And he managed to do it all while throwing some pretty stellar parties, to boot.

The way Peter got so great is that he was incredibly motivated, and willing to try and do anything. Including dentistry. If you were a noble with a toothache? Yeah, you’d best not complain about it in the presence of Peter. He was a big fan of playing dentist, and thought he was pretty damn good at it. The people whose teeth he was yanking out (without painkillers)? They weren’t such big fans. After Peter’s death they found a giant bag of teeth that had been meticulously labeled and cataloged.

(Except Peter pulled your teeth out with 100% fewer puppies)

2) Catherine the Great tells her husband to GTFO
Catherine the Great wasn’t originally from Russia— she was a Prussian princess who married the Russian tsar, Peter III. Peter III, oddly enough, wasn’t really Russian either— he’d been raised in Germany and didn’t even speak Russian, really. He spent a lot of his time complaining about how much Russia sucked compared to Germany, which didn’t make him very popular with his subjects.
Catherine, on the other hand, was a publicist’s dream. Catherine was sort of a lesser princess back home, so she realized that tsarina of Russia was basically the best gig she was ever going to get. She learned Russian, made friends with the nobility, learned her history— people freaking loved her, especially compared to her whiny husband.
It only took about sixth months for people to get tired of Peter being such a jerk. Catherine gathered together a group of soldiers who captured Peter, then she forced him to sign the crown over to her. Shortly after this, Peter was strangled to death. Some say Catherine ordered him killed. I’m not saying she did, but I am saying that she wasn’t very sad about him getting dead.

The original idea was that Catherine would only rule for a little while, until her son with Peter was old enough to take over. But it turns out that Catherine was totally badass. She wound up ruling Russia for 34 years, until she died of a stroke when she was 67.


3 and 4) Russian Weather Wants You Dead
If we were giving out trophies for best winter, Russia would pretty much always win. Here, let me explain to you what a Russian winter feels like: Imagine everything is white and covered in snow and ice. And you are cold. And now you are dead.

The Russia people knew its winter was not to be trifled with, so they used it as a weapon again two of Europe’s powerhouses— Napoleon Bonaparte in 1813, and again against Hitler in World War II. Here’s the step by step plan:

1) Burn down your own cities, crops, and supplies.
2) Move your people— who, as Russians, know how to DO winter— out into the countryside.
3) Enemies arrive to find no food, shelter, or Russian hotties to hang out with.
4) Enemies freeze to death.
5) Return to cities feeling smug.

Napoleon invaded Russia with over 600,000 soldiers. But after Russia went all IT’S WINTER, %$*#&S! on him? He limped back to France with only 100,000. The Russian winter managed to destroy an army that literally the rest of Europe couldn’t.
A century and a half later, Hitler invaded Russia in late summer. He figured he’d be out before winter hit. He did not count on what comes before winter in Russia: MUD SEASON. Thats right. If the Russian winter doesn’t get you, the autumn mud season will. So Hitler’s armies got stuck in the mud, and then the seasons changed, and Russia Winter was all HEY GUYS! YOU THOUGHT YOU COULD LEAVE WITHOUT SAYING HELLO TO ME? Hitler’s troops didn’t have cold weather gear, and wound up burning fuel meant for tanks just to stay warm. The Russians, meanwhile, were once again pros at this whole “winter” thing, and had fur-lined hated and cozy warm uniforms and equipment that was really, really good at going over icy terrain.

(Do not attempt this unless you are an actual Russian)

Hitler refused to back off, and forced his soldiers to stay there— even though he wound up losing over 800,000 men and pretty much gaining nothing at all. What’s more, the resources and energy Hitler lost in Russia gave the Allies footing to defeat Hitler in other parts of Europe.

5) Ivan the Terrible is Terrible
So, Ivan the Terrible actually got a lot of stuff done— he expanded the Russian empire, he was big into the arts, and he even opened Russia’s first publishing house.
But…he also had a temper. A serious temper. Ivan the Terrible is so named because he was tough, imposing, and impressive. He was unforgiving and people were straight up afraid of him. The common people of Russia loved this— their Tsar was a badass! The nobles that had to deal with him more directly? Not so much.
See, when I say that he had a temper, I don’t just mean that sometimes he got frustrated. This guy seriously had mental illness— some people even speculate he was bipolar. The worst was when his daughter-in-law, who was pregnant, showed up wearing some clothes that Ivan thought were a little too risqué.

They got into a fight, and Ivan beat her so badly that she wound up miscarrying. Obviously, Ivan’s son wasn’t happy about his dad beating up his wife, so they wound up getting in a fight. Ivan struck his son over the head with an iron curtain rod, and the son— who was Ivan’s well-liked and well-groomed heir to the throne— wound up dying. This left Ivan’s mentally disabled son Feodor as the only heir to the throne. 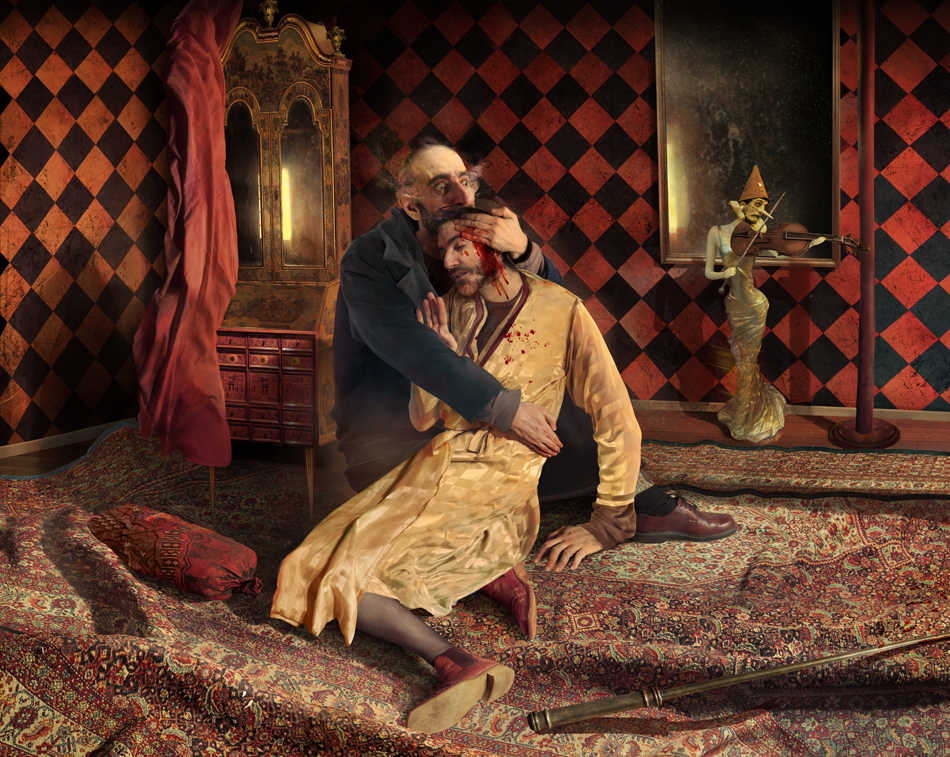 (A painting by Ilya Repin of Ivan the Terrible killing his son. I have no idea why there is a sad clown playing a sad violin in the background.)

Given his mental disability, Feodor wasn’t a great ruler; most of his responsibilities had to be handled by his uncle and a minister. He preferred to spend his time wandering the countryside, ringing bells in churches. He died childless, and the whole ordeal wound up launching Russia into a massive civil war.