Here is a writing post for you, that will start by being a non-writing post, so hang with me.

I am 32 this year. I don’t feel 32– I feel like I maybe just turned 19. Maybe 22, if I’m being mature. But nonetheless, I am 32, which means loads of people around me are having or have had babies. I have close friends on their second, third, even fourth babies. Students I taught when they were freshmen in high school have toddlers. One of my high school friends has a daughter in middle school.

All this– and probably plenty of other things– have made me question my own childlessness. I wrestle with it on a daily basis, if we’re being totally honest: I like my life as is. But I also think I’d be a pretty cool parent, as would Male Counterpart. I think our kids would be awesome. It seems like something I’d like to do. But every time I think YES, this should happen, I read something online that a parent-friend has posted or RTed or linked. Memes of trashed houses or dirty showers or unwashed clothes that say something in all caps about how this is just LIFE if you are a parent. Complaints about never going to the bathroom alone, or about not having a full night’s sleep in years. Comics poking fun at Mom’s skill vs. Dad’s well-meaning ineptitude. 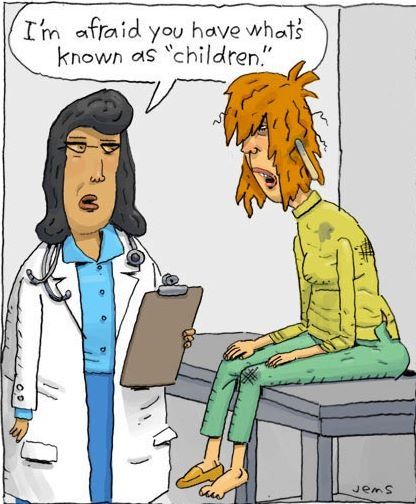 Seriously, this stuff is everywhere. It’s overwhelming. It is the reason why I doubt my ability to simultaneously be a mother and be my own person. It has made me wonder why anyone would have children, since they obviously are nothing but misery factories.

Of course, when I ask these friends why the hell they did this to themselves, they tell me that parenting is wonderful, wonderful, wonderful, even when it’s hard. They tell me how much they love their children, how overwhelming and special it is. Some tell me not to worry– that plenty of parents DO in fact get to go to the bathroom alone, and plenty of fathers are totally capable of diapering.

But those aren’t the stories that get told the loudest on the internet, of course. And hey, I get it– a tweet about how much you adore your kid isn’t going to get many views or RTs or laughs. It doesn’t make for as entertaining a narrative, not by a long shot. But those tweets/comics/stories DO have power, major power, not just on you, but on your readers/listeners/friends/followers.

Which brings me to the writing part of this blog post:

This year, I’m making a very conscious effort to not complain about writing. This is partially because of logic I first read about in BIG MAGIC (which you should read right now)– constantly complaining about the work that comes with creativity scares off creativity. It’s also partially because I realized what a hypocrite I was being– frustrated by the PARENTING IS AWFUL posts, yet simultaneously tweeting something that implied WRITING IS AWFUL on the regular.

Now, let me say this: I have zero judgment for people who complain about writing online. This is my own thing, and I’m sharing because I think it might help others. But we’re all different, and we all approach writing and creativity and life differently. I do not think people who find it helpful to complain online are lesser or greater writers than I am; I just think that complaining online made me a lesser writer.

I get that it’s fun to talk about the misery of revisions or OMG DRAFTING or the crushing self-doubt that comes with writing. Those make shareable tweets and are easy to find funny gifs for. It’s fun to commiserate and helps us all feel a little less alone. But I do worry that sometimes, amid all that funny complaining, if we don’t start to believe our own rant a little bit? I mean, why WOULDN’T I start to believe that revisions were an impossible feat, if I were telling myself that every day by way of twitter? Why wouldn’t I start to feel overwhelmed if I constantly Facebook-wept about my deadlines or editorial letter? There’s something to be said for the value of daily affirmations, which means there’s something to be said for daily negations.

And with that said– I’ve tried to keep in mind that my complaints can and likely do have an effect on others. Why would a novice writer think he could pull through revisions if a published author is constantly telling him that they’re miserable? Why would a teen at a keyboard think she could write a novel if I tweeted again and again about the horror of getting a long edit letter? Even authors with similar career trajectories to my own– why would they believe they could push through if all around them, their friends and peers and contemporaries are shouting “WE CAN’T DO THIS”? I want to be the person helping paddle the rowboat, not the one who barfs over the side of the boat and makes everyone else barf as well.

(Barf is just a ridiculous word, isn’t it?)

At its core, writing is awesome, and exciting, and fun– and if that weren’t the case for me, then I wouldn’t be writing. So, this is why I’ve been tweeting “I’m excited to write today” almost daily for the last few months. Even when I’m frustrated or feeling down about the process– which still happens, because of course it does– I remind myself that I’m excited and lucky and happy to be creating– and squash the temptation to put anything into the universe that would suggest otherwise.